Nicotine and choline are two of the most powerful nootropics that have been greatly studied owing to their effects on the short-term and long-term brain function.

And even though the two have earned respect for their pick-me-up kind of benefits, questions abound as to the effects of stacking the two.

So, nicotine and choline supplementation, any synergy? Well, let’s find out.

Nicotine is a nootropic that has received a bad rap from all kinds of people especially due to the negative effects of tobacco use. But as research has confirmed, nicotine itself isn’t as harmful as you might have been made to believe (Source).

The only time nicotine seems to have some potentially negative effects is when it obtained through the smoking of tobacco. And that’s because tobacco has got other elements which can act as tumor promoters (source).

So, this is also a disclaimer that by lauding nicotine and its perceived benefits, we are not encouraging you to start or continue smoking. Smoking is dangerous to your health.

If anything, we have nicotine in all kinds of plant among them the eggplant, potatoes and even tomatoes all which are pretty safe. And these provide you with an opportunity to experience the many benefits of nicotine without putting your wellbeing on the line.

In the recent past been under the spotlight all thanks to its potential benefits in the management of:

How Nicotine Works As A Nootropic

Levels of serotonin, norepinephrine, and dopamine have also been shown to increase the more one uses nicotine.

Another benefit of taking nicotine is that it stimulates the growth of new blood capillaries and increases the number of red blood cells in the body. Unfortunately, this increase in the number of blood vessels in the body can also promote tumors, although it doesn’t cause cancer all by itself.

Some call it the MVP of the nootropics world and it’s easy to see why. Without enough choline quantities in your brain, it’s difficult even for the next, well-made nootropic stack to work.

One thing we can confirm about choline is that it’s neither a mineral nor a vitamin. Rather, it’s a water-soluble element which is closely associated with the Vitamin-B rich compounds.

Also, choline is naturally found in the brain. But unfortunately, the body cannot produce it in adequate quantities and that’s why supplementation is important. Some natural sources of choline include:

Choline As A Nootropic

Your brain has a huge appetite for choline since it plays a central role in the production of acetylcholine. And as we have already discussed in the earlier paragraphs of this write-up, acetylcholine is needed to maintain a clear communication at the intra-neuron level.

It is no wonder choline is a central part of all nootropic stacks that claim to help in:

Indeed, inadequate quantities of it can lead to memory loss, poor recollection, fatigue, and brain fog. Yet even though some food items have it, they don’t contain it in high concentrations.

Derived from sunflower or soy lecithin, this supplement provides you with a highly bioavailable form of choline. In fact, about 40% of Alpha GPC is made up of nothing but choline. 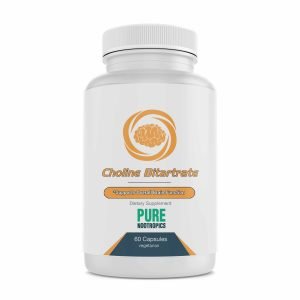 As its name suggests, this is a blend of choline and tartaric acid. Tartaric acid is meant to increase choline bioavailability. This source is, however, thought to be a less effective choline

Also known as Citicoline, CDP-Choline is unique in the sense that it is the only naturally occurring form of choline that mimics what’s found in your body. Once you take it, it’s digested and broken down into choline and cytidine.
Choline gets re-converted into CDP-choline once in the body while cytidine forms an important component of your RNA.

Is There Any Synergy In The Choline & Nicotine Combination?

If you live in a country or region where it’s difficult to get Piracetam or Galantamine, a combination of choline and nicotine would provide you with a viable alternative.

And, therefore, by taking the two, you would generally experience a healthy increase in choline.

Recommendation 1: Take 500 milligrams of Alpha GPC (or any other choline supplementation) along with a 2mg nicotine gum. Of course, you’ll need to swallow Alpha GPC and chew the nicotine gum.

Recommendation 2: Take 500 milligrams of a choline supplement e.g. Alpha GPC along with a 1.5mg nicotine pill.

Recommendation 3: Stick to the recommended daily choline dosage along with a 7mg nicotine patch. If you’re an ex-smoker, you can go for the 14mg patch but keep reducing on it over time.

The best time to take this stack is early in the morning, preferably between 8:00 and 9:30. Consider taking it on an empty stomach for optimal effects.

Some of the benefits of taking this dynamic duo include mental clarity, lucidity, better memory, better focus, and good mood.

Of course, these results are not typical you might experience all of them at once, some of them or none of them depending on a wide variety of biological reasons.

*Too much of choline can cause gastrointestinal distress

So, there you have it – the answer to the question of whether there’s a synergy in choline and nicotine supplementation or not. And as the report above confirms, the two can form a dynamic duo. And, therefore, if you’re looking for a piracetam alternative, this combination would be worth giving a shot.