Awakened Alchemy is home to two popular nootropic stacks i.e. the Awaken all natural stack and the Awaken Gold one that contains Noopept. Today, our focus is on the all-natural Awaken which contains 10 active ingredients including adaptogenic herbs, amino acids, multi-vitamins, and nootropic elements.

It is touted as one of the most successful stacks on the market. And if the different Awaken reviews posted online are anything to go by, this sounds like a pretty good deal for the quality-conscious shopper.

But since the results aren’t always typical, the best way to look at it is by looking beyond the hype and focusing on the facts instead. This way, you can easily determine whether or not it’s worthy of your attention or not.

Awaken Review: Facts About This Stack from Awaken Alchemy

Designed to help in fueling ingenuity and unleashing creativity, this product is claimed to contain the high-quality nutrition your brain needs to function optimally. Generally, the stack is designed to perform 4 tasks.

The nootropic stack increases neuroplasticity and supports the production of the Nerve Growth Factor (NGF) and Brain-derived Neurotrophic Factors (BDNF) which are important peptides in brain development. What’s more? By improving the quality of neural connections, this stack also boosts fluid intelligence making it easier to learn new information.

Any decline in memory capacity is in one way or another related to a fall in the level of key neurotransmitters. In that case, Awaken from Awakened Alchemy works by boosting the levels of neurotransmitters commonly associated with short-term and long-term potentiation. As such, it boosts your ability to create new memories and also remember better.

Has brain fog been slowing you down? By boosting the presence of key neurotransmitters in your brain, Awaken is meant to improve your ability to think clearly and focus better. On top of that, the product reduces stress and anxiety which are some of the causes of poor energy production in the brain.

Negative thoughts and emotions can negatively affect your brain chemistry making it difficult to think clearly.
If you take this nootropic stack, your brain will react by releasing more serotonin and dopamine which are also known as the positive neurotransmitters. In other words, the two are associated with happy thoughts.

In that regard, you can count on Awaken to help you start your days on a high note and with the right mindset no matter what lies ahead.

As we have already mentioned, 10 natural ingredients have been included in this formula. Each one of them is believed to be backed by clinical studies. Let’s unpack them, one by one, to see how true those claims are. 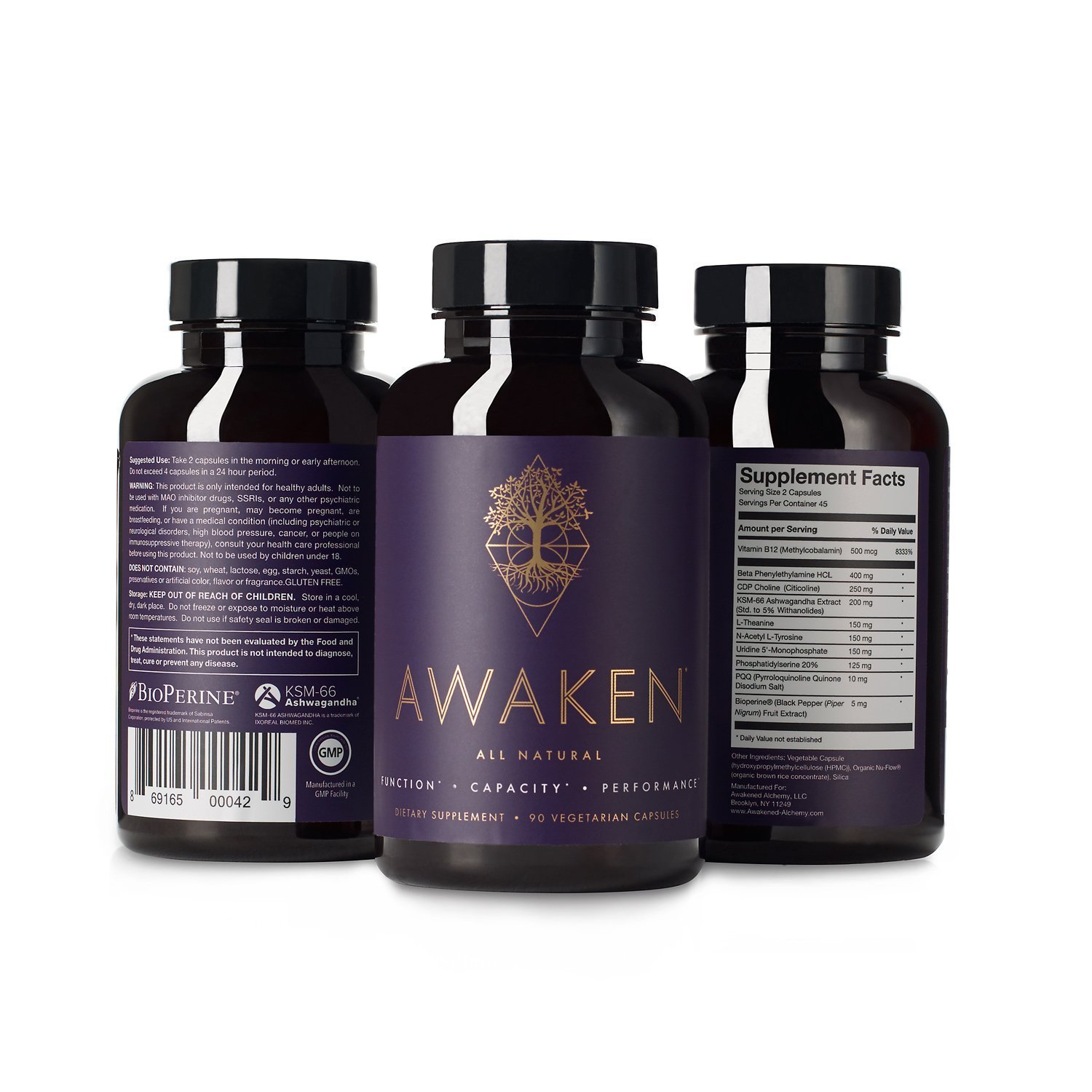 Visit The Official Website To Check The Latest Prices >>

Also known as PEA, this is a “neuro-amplifier” that’s naturally produced in the body and responsible for uplifting mood, promoting creativity and increasing alertness. In particular, this ingredient influences the activity of your key neurotransmitters among them:

On its own, PEA is a neurotransmitter! It is known for promoting goal-directed behavior and heightening focus. That’s alongside the fact that it’s a mood booster.

If you carry out a background research of this particular product, you’ll discover that it’s one of the most sought-after nootropic supplements out there. And its job is simple – to boost the growth of mitochondria and, therefore, promote energy production at the cellular level. As such, you can rely on it to increase your natural energy levels and also promote healthy aging.

Naturally found in the green tea leaves, this is a powerful ingredient especially when it comes to optimizing your brain performance. It works by stabilizing the alpha and beta waves. By doing so, it provides optimal conditions for the healthy functioning of the main neurotransmitters i.e. Serotonin, GABA, and Dopamine.

On top of that, L-theanine boosts BDNF and NGF which are two highly important factors in the growth of nerve cells. It’s also worth noting that this particular nootropic also prevents the growth of NMDA receptors which are known to inhibit Glutamate.

Found naturally as L-Tyrosine, N-Acetyl-L-Tyrosine is an enhanced form of the amino acid which is also highly bioavailable. Indeed, this substance plays a key role in the production of epinephrine, norepinephrine, and dopamine. At the same time, it supports the optimal benefits of Coenzyme Q10 which is critical for the mitochondrial health.

NALT boosts your mood and gives you the power to work for long hours even when you’d otherwise be mentally fatigued. It also supports motivation and helps you achieve peak performance with ease.

This is a patented form of the Ashwagandha extract that contains more than the average 5% withanolides content (i.e. active ingredients). It’s harnessed through the process of “Green Chemistry” and that is without the use of chemical solvents like alcohol in order to boost its purity ratings.

One thing you need to know about Ashwagandha is that it’s a powerful adaptogen. Its job is to improve your body’s ability to cope with stress. As such, it is commonly recommended for people fighting anxiety or depression symptoms.

Citicoline is a powerful source of choline which is almost as good as Alpha GPC in crossing the blood-brain barrier. With this ingredient making it to the list what you have is an important brain stimulant that’s needed to boost neuroplasticity and support memory formation.

Another awesome aspect of CDP Choline is that it replenishes your natural levels of phospholipids which are required for the healthy functioning of the brain. And in so doing, it also improves the quality of dopamine receptors improving the feel-good effects typical of the neurotransmitter.

This is yet another dopamine booster to make it to the list. It is meant to improve learning and memory particularly by influencing brain chemistry.

PS is renowned for the fact that it is rich in fats or phospholipids that are important for the growth and function of nerve cell membranes. Besides that, it boosts the effects of CDP choline making it possible to experience optimal benefits from the all-important brain food. Lastly, the noot boosts aerobic endurance making it possible to work effectively even for long hours.

It’s probably the most bioavailable form of Vitamin B12 and indeed, methylcobalamin does a good job of enhancing mood and optimizing brain health. On top of that, this is a cofactor in the production of Dopamine, Serotonin, Norepinephrine, and GABA.

An extract of black pepper, Bioperine’s main job is to boost the rate at which the rest of the ingredients are absorbed in the body. On top of that, it boosts neurotransmission of the feel-good hormones. Generally, the main role of this ingredient is to increase the bioavailability of the other active ingredients.

Awakened Alchemy is a brain nutrition supplement manufacturer based in Brooklyn New York. The company has been around for quite some time and jumped to the limelight with their flagship product simply known as Awaken. They later launched Awaken Gold, Awaken Dream and are soon planning to introduce the Awakened Thrive Gold product for boosting longevity. 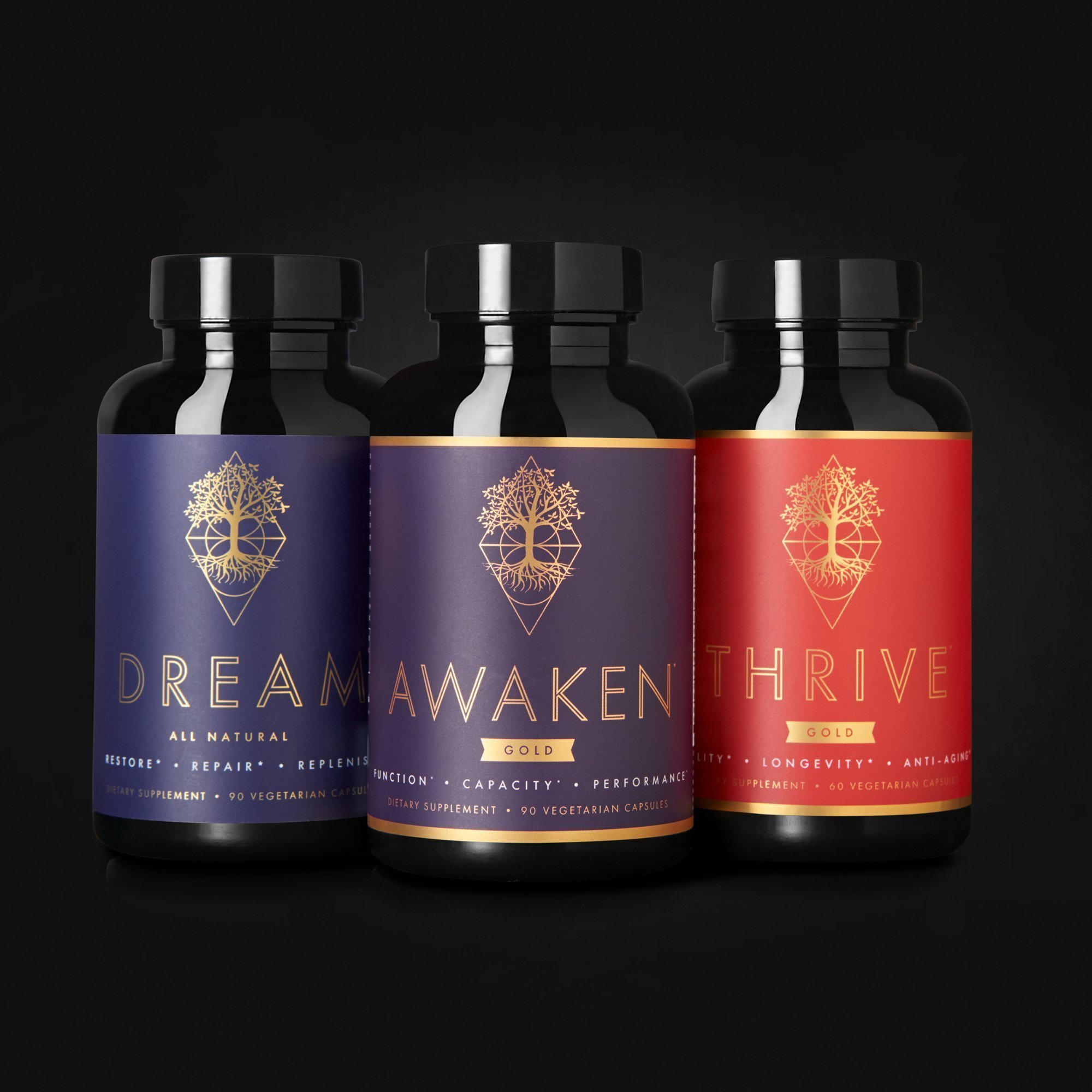 Other Supplements from Awakened Alchemy

A single bottle with a month’s supply of the pills will cost you some $99 USD. 2 Bottles cost $179 USD and 3 bottles go for $249 USD. So, the larger the quantity you order for, the better the deal becomes.

At $99 USD per bottle, this product doesn’t come cheap. Luckily, we have managed to secure a 20% coupon code for our readers. Just use code FITSMART during the checkout process for 20% of the total order price.

How Long To Experience Its Effects?

The effects of taking this supplement tend to build up over time. Unfortunately, you may not experience subtle effects after taking just a few pills! Sometimes you need to take the supplement for 7 to 10 days to start noticing a surge in brain energy.

It’s important to be mindful of the fact that this, just like any other nootropic stack out there, might cause some side effects, especially when taken in large doses. Fortunately, these effects are quite mild and tolerable. They include: 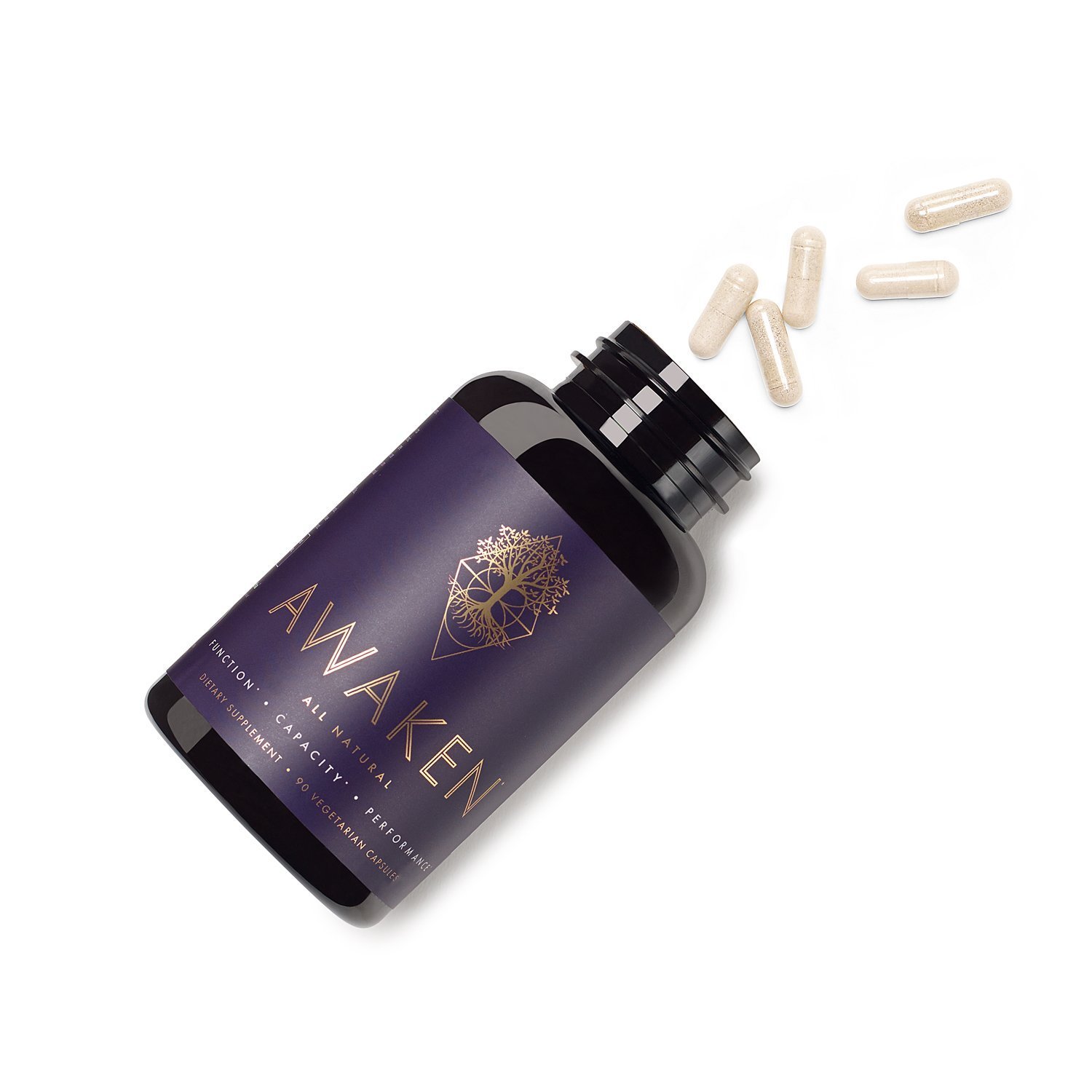 Anyone looking for a non-addictive, safe, and healthy brain supplement can benefit from Awaken. That said, it doesn’t come at a cheap price and you need to have a strong spending power to sustain an Awakened Alchemy habit. We’d recommend it for the working class and professional athletes.

Ryan Collins from Supplement You Need Posted – “This product stands out from the competition with its premium-quality ingredients and a high price tag.”

Eric Belcher from The Nootropics Review Posted – “If you want to boost your mood and memory, you can try Awaken as [sic] it might help.”

In the world of “smart drugs” there are two categories of supplements namely regular and premium. Regular supplements are cheaply priced but tend to compromise on the quality and bioavailability of the ingredients.

Premium supplements as seen in this Awaken Review, on the other hand, are known to feature top quality ingredients which make them perfect for quality-conscious shoppers.

With that in mind, Awaken from Awakened Alchemyis the kind of stuff you invest in when you want to be the best of the best. It’s quite well-made and with just enough potential to re-awaken your brain and increase its capacity.

Editors Note: This article was last updated on 28-July-2019.