Imagine getting a nootropic supplement that focuses on just enhancing your mental speed, memory, and focus? Wouldn’t that be great? Well, it appears that there is actually one supplement on the market that delivers all of these benefits and much more.

Enter Alpha Brain, a nootropic stack that helps support various brain functions including verbal memory and processing speed. And just like any other product, this supplement has received both positive and negative reviews from people seeking to enhance their cognitive function.

As a matter of fact, there has been some debate and controversy about whether or not Alpha Brain delivers on its promises. Therefore, we would definitely understand if you’re skeptical about giving this particular nootropic a shot.

That said, in this review, we’ll be providing you with everything you might need to know about this nootropic. We hope we’re able to clear things up for you.

Alpha Brain Review: What Exactly Is It?

Simply put, it is a nootropic supplement developed by a company called Onnit Labs. The company released Alpha Brain back in 2011 as their flagship cognitive enhancer. Besides Alpha Brain, Onnit Labs continues to produce various innovative products including performance supplements, minerals, and vitamins.

The stack may help you easily remember places as well as names and even enhance your mental speed. More so, it may assist you in focusing on complex tasks and increase your chances of lucid dreaming. It is for this reason that this nootropic stack has gained popularity among people looking to optimize their brainwave.

Does it Really Work?

Onnit Labs claim that Alpha Brain works the first time you take it. But how true is this? The truth is that while it might work instantly for some people, everyone is different. Therefore, the results are not typical. As such, you need to give the stack at least two weeks before determining whether or not it works for you.

And to understand better how this dietary supplement works, let’s have a look at what ingredients it is made of.

For one thing, the manufacturer lumps some of its key ingredients together into a proprietary blend. This means that Onnit Labs only discloses the ingredients but not the exact amount. As such, it would be difficult to determine the exact quantities of the specific ingredients included.

Moving on, let’s now take a closer look at the ingredients’ list which includes a three-in-one blend.

This blend comprises ingredients such as L-Theanine, Oat straw extract, L-Tyrosine, and phosphatidylserine. And as its name suggests, this blend may help enhance your workflow and, therefore boost your productivity.

As far as L-Theanine is concerned, it has been shown to enhance the effects of the Alpha brainwave. It may also help facilitate relaxed concentration. L-Tyrosine, on the other hand, promotes brain performance while also providing stress relief.

Oat straw is believed to complement the effects of L-Theanine while phosphatidylserine works to support brain cell membranes.

When it comes to Alpha-GPC, this ingredient has been reported to increase acetylcholine levels in the brain (1). And as a result, it helps reduce cognitive decline in older people and improve memory. Bacopa extract, on the other hand, is reputed for its ability to enhance your memory and may decrease anxiety.

Similar to the focus blend, this blend consists of three ingredients which include L-Leucine, and Pterostilbene. Pterostilbene is a common natural endurance enhancer found in blueberries. As for L-Leucine, this is an amino acid that has been shown to boost physical energy so you’re more productive all day long.

Who is Alpha Brain Best For?

If you are in any kind of competition, then this stack is definitely for you. It doesn’t matter whether you’re competing for a promotion in your workplace or simply against other investors in the stock market. This nootropic supplement can really help you gain a competitive advantage.

Athletes, students or people who manage their own businesses whether big or small can also benefit from taking Alpha Brain. 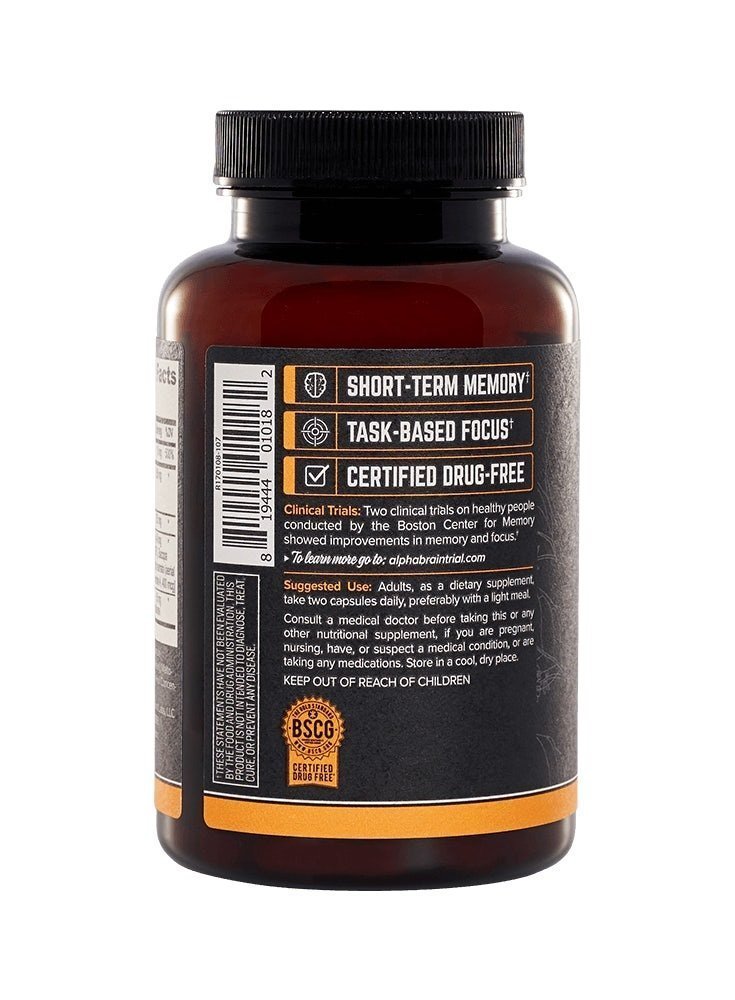 Any Side Effects to Watch Out For?

However, in case you fail to take the recommended dosage, you might experience some negative effects including:

If you experience any negative effects whatsoever while using this stack, we recommend you stop using it and seek medical attention. More importantly, if you’re pregnant, nursing or taking any medication, you should consult a doctor before taking this dietary supplement.

According to Onnit Labs, the recommended dosage is two capsules per day and preferably with a very light meal. Also, you should not take more than three capsules within a 24-hour period.

Unlike other stacks that you can take on an empty stomach, this is not the case with Alpha Brain. Ideally, the best time to take the capsules is in the morning with breakfast or in the early afternoon.

Apparently, you might experience the effects almost immediately which might last up to eight hours. However, for some people, it might take at least two weeks to experience the real benefits of this nootropic stack.

Where to Buy and Pricing

If you want to buy this dietary supplement, you can do so on the Alpha Brain official website. The price varies based on the number of pills in a bottle. A 30ct bottle goes for around $29.71 while a 60ct bottle which will last you a month costs only $50.90. You can also buy Alpha Brain in a 90ct bottle for only $67.96.

Fortunately, we have managed to get a special 10% discount on all Alpha Brain purchases by our readers. Use this link to trigger the discount.

Alpha Brain is one of the most popular nootropic supplements in the world. As such, we get so many questions about it from our readers. So, below are some of the most common queries we get asked.

Q: How long does it take to start noticing the effects of Alpha Brain?

A: There is really no definite answer to this question. How long this stack takes to work varies from one person to another. Some users may notice an improvement immediately after taking the supplement. Others report that it took them one to two weeks to see a difference.

Q: Is Alpha Brain a stimulant?

A: No, it’s not and it does not have stimulants. Instead, it works by stimulating neurotransmitters directly. Therefore, it won’t really wear out your adrenals. But if you love coffee, you can enjoy both of them altogether.

Q: Can I take Alpha Brain on a daily basis?

A: Yes, you can since this nootropic stack is designed to be taken every day.

Q: Is Joe Rogan the owner of Onnit?

A: No, he is just a major shareholder in the company. Onnit Labs was started by a guy called Aubrey Marcus who is also the current CEO.

A: Alpha Brains aims to enhance different aspects of your mental performance like memory, focus, and attention. Also, it may give you lucid dreams. Some users have also reported that after taking this dietary supplement, they experienced better night sleep.

Alpha Brain has been around for several years. However, much of its popularity today is due to Onnit’s great marketing efforts. Nevertheless, the supplement is generally well-made and continues to attract positive reviews from users across the world.

However, for some people, this stack just doesn’t cut it compared to other nootropic supplements on the market today.

Verdict: Overall, if you’re looking to improve your cognitive performance, Alpha Brain is worth trying. It might not cover every single aspect of cognitive enhancement like other nootropics but it does support memory and focus. You may click here to visit the official website of this brain booster and get 10% off exclusive to our readers.